Skip to content
One Billion Rising- Rising for the Bodies of All Women, Girls, LGTBQIA+ and the Earth 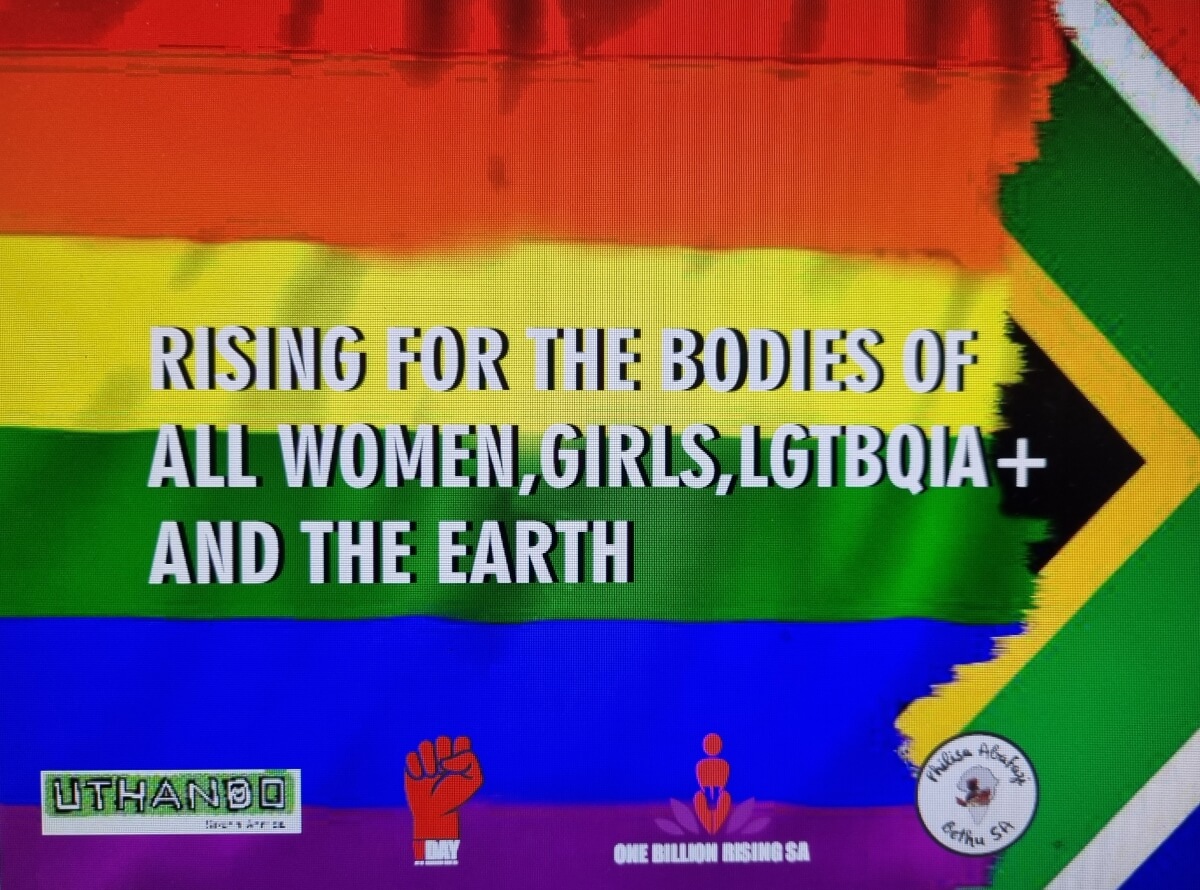 One Billion Rising – Rising for the Bodies of All Women, Girls, LGTBQIA+ and the Earth

Uthando was one of the proud sponsors for the “VDAY” event held at the Philisa Abafazi Bethu “Heal Our Women” Centre on 5 March, bringing together hundreds of people and broadcast live to several African countries, calling for ACTION to protect, nurture and love the LGTBQIA+ community.

James Fernie was invited to offer the opening address. His full speech can be read below: 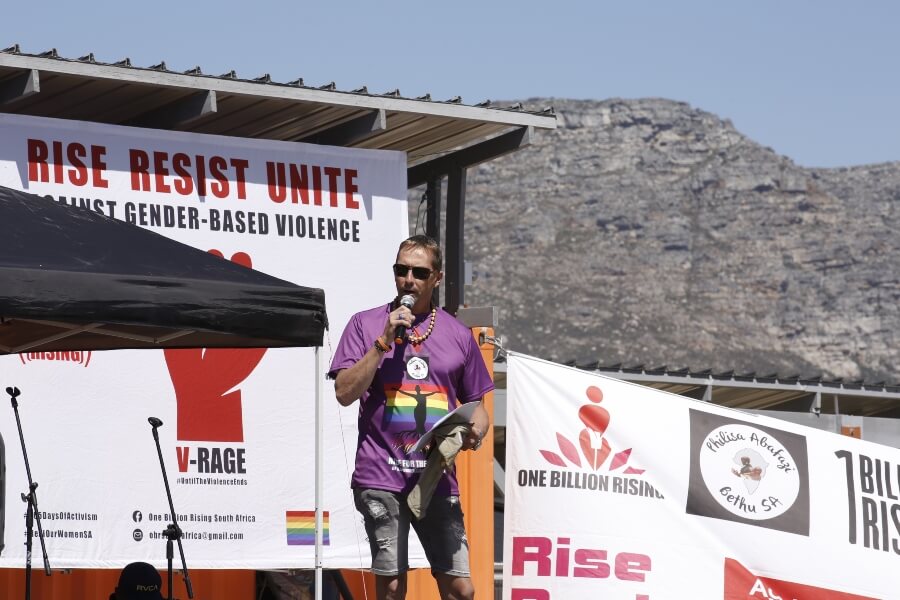 “Molweni. Goeie middag, Good afternoon! Greetings to all you beautiful human beings, both close and far. To our friends watching this on Facebook live, we hope you find joy, strength and inspiration from this event, and wherever you are, we wish you peace, love and respect.

It is a great honour and a privilege to be present with you all here today and to kick off this meaningful and inspiring ‘Celebration of Love.’

To Lucinda Evans and the Philisa Abafazi Bethu team, thank you for hosting this remarkable and important “One Billion Rising South Africa” event in your beautiful community centre here in Retreat, Cape Town, South Africa.

May you continue to be blessed on your passionate path and programme of action, of supporting community (and I mean the local and broader community) and spreading love and compassion.

I have brought two props with me here today, my cub shirt (which I wore when I was around 7 years of age way back in 1978) and my matric shirt which I wore on my last day of school back in 1989.

By and large I have good memories of my childhood, but when looking at these shirts I am also reminded of the terrible anxiety, self-loathing and deep emotional confusion that I had to endure for much of my young life growing up in apartheid South Africa in the 1970’s and 1980’s, when it was illegal to be different, when being, and being called a ‘moffie’ meant enduring mental, emotional and possibly even physical abuse.

I grew up on a farm in the Eastern Cape of South Africa, a very rural and conservative part of the country. People used the word ‘gay’ to refer to you as being happy…oh what a gay sense of humour that fellow has. The concept of a man loving another man, i.e. being gay, was totally foreign.

To use the words of the fictional character, Daffyd Thomas, from the British comedy series called Little Britain, “I felt like the only gay in the village” and at that time there were no cellphones, no internet and nobody to share my innermost feelings, desires or emotions. There was just no outlet. Revealing one’s thoughts or identity risked being referred to a psychologist for ‘healing’ of this terrible affliction of being a sexual deviant.

In addition to struggling with my own sense of self, I just could not understand or comprehend why people with a different colour skin and different racial characteristics could not live next door to me, could not swim on the same beaches, could not attend the same school. The violence metred out to innocent and decent people who were striving for their basic rights and freedoms, was totally beyond my comprehension, made even worse by the prevailing sense that this was morally justified by the ruling class. I was so overwhelmed with the unfairness and injustice of it all. The world made no sense at all to me.

Apartheid was far more than just a system of racial discrimination. It was an all encompassing system which demonized and criminalized ‘the other’, people who were different and who did not fit into the mold of the white Christian nationalist. It was incredibly difficult to bear witness to the inhumanity of human beings to other human beings.

To give you some idea of the depth of depravity, violence and humiliation suffered by gay and lesbian people during the dark days under the National Party government, one need look no further than Dr Aubrey Levin (otherwise called “Dr Shock”), who headed the medical team in the infamous Ward 22 of One Military Hospital in Pretoria, where Dr Levin practiced what has come to be known as “The Aversion Project”, where he subjected white gay and lesbian individuals to electro-shock therapy.

His project was expanded when, in 1970, he oversaw the building of Greefswald, a farm just outside of Limpopo province in the north of South Africa. The farm was used as an experiment where many young men were subjected to forced labour and physical torture in a bid to “peel [them] like an onion”. This meant that those who were not cured of their deviance while under Levin’s care in Ward 22 were sent on to Greefswald. Here, patients were subjected to a rogue version of military training; they were forced to march for hours through the bush, build barracks, shoot wildlife, and were deprived of food and sleep. They were not allowed any contact with their families, who believed they were still being treated at Ward 22.

In 1995, Dr Levin fled South Africa with his family and relocated to Canada in order to avoid being held accountable for his mistreatment of gay and lesbian people, and very interestingly on the 28 January 2013, Dr Levin was convicted by a Canadian jury of sexually assaulting his male patients. More than 30 male patients came forward with stories of sexual abuse at the hands of Dr Levin. If ever there is an example that LGTBQIA+ phobia is driven by fear, this story is just that.

During my teenage years in the 1980’s, I personally cannot recall one gay role model at all. The AIDS pandemic was sweeping the world and news was emerging of high profile Hollywood actors and entertainers such as Rock Hudson and Liberace dying from this ‘gay disease’. Most of you here today will have no clue who these people are, but at that time it was a big deal. To an impressionable, ignorant and totally naïve young boy struggling with his identity and sexual orientation, AIDS reinforced the absolute dread and fear about myself, about who I was a human being. Self-love gave way to confusion, fear and guilt.

In that process, this beautiful, decent young gay boy with a kind heart and a good soul, struggling to find his place in the world, had thoughts of disgust and fear for the type of life that hewould one day lead. It felt like being stuck in some kind of no-mans land

I, like many gay boys and men, grew up leading double lives, because being honest and truthful meant the risk of ridicule, separation and exclusion.

Many of you listening here today might relate to this feeling.

It has taken me much of my adult life to find my own freedom of self-acceptance for being different. Without the emotional tools or any real ’gay compass’, I came screaming out of the closet in London in 1995, and very often I found love in all of the wrong places.

Coming out in the midst of the rave scene in the 1990’s was truly a liberating experience.We had lots of fun but also plenty of tragedy with many of my young friends and party acquaintances ultimately landing up in drug rehabilitation centres or worse, losing themselves forever in the prevalent culture of excess.

South Africa has come a long way from those dark days.

In May 1996, South Africa became the first jurisdiction in the world to provide constitutional protection to LGBT people, via section 9(3) of the South African Constitution, which disallows discrimination on race, gender, sexual orientation and other grounds.

Since 1994, when the new government came to power, gay and lesbian people have gone to the courts to make some important changes to the law concerning them. They have worked hard.

In fact, since 1994 Parliament has passed more than 30 laws that make sure that gay and lesbian people are treated fairly and are protected by the law.

Despite the legal victories for the LGTBQIA+ community in SA, the promise of true freedom and the ideal of each and every human being to fulfill their true potential still evades large sections of this community, even in progressive countries like South Africa.

Sadly, there are many places in the world which are still stuck in those old chapters of history of fear, discrimination and violence against ‘the other’.

If you are living in one of those communities, just know that you are not alone. History is on our side.

Whenever you feel lonely, sad or despondent, just remember human consciousness is now changing faster than ever. It might not seem like it, but tidal waves of love are crashing over the human race.

Women only received the vote in 1918!

Homosexual acts were only legalized in the United Kingdom in 1967.

The profound emotional struggles that I have had in my life ultimately led me to starting a non profit organisation in 2007, called Uthando South Africa. Uthando means love, and it is only through kindness, empathy, compassion and love, that can we truly change the world.

I have had to learn through some very dark and difficult times to be kind, loving and gentle to myself. To overcome those deeply entrenched emotions of self-loathing because of the hatred and bigotry towards people like me. I know how difficult this journey can be, but the journey of self-discovery and self-love is also so rewarding.

The world still makes no sense to me: the inequality, discrimination and bigotry, all of which takes a very personal toll on the souls of sensitive people. I am grateful for my work which allows me to be in the world, to try to be the best version of myself and to overcome my limitations, many of which are deep rooted in feelings of shame and inadequacy from my struggles of dealing with my identity and sexual orientation.

My advice for you today is short:

Be kind, loving and gentle with yourself

You are not alone

And always remember, it might not feel like it right now, but the collective human heart is changing for the better, and history is on our side.

We love you, wherever and whoever you are!”